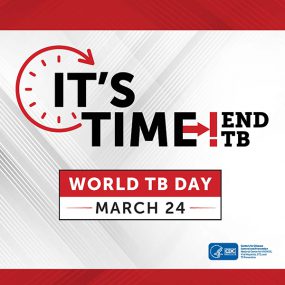 World TB Day is a day to educate the public about the impact of tuberculosis (TB) around the world. For many decades, death was likely for people with tuberculosis (TB). World TB Day celebrates the day in 1882 when Dr. Robert Koch discovered the cause of tuberculosis. At the time of Koch’s announcement, TB was raging through both Europe and the Americas. It caused the death of one out of every seven people. Dr. Koch’s discovery was an important step toward the control and elimination of this deadly disease.

Scientists later learned that there are two types of TB Conditions:

TB was the first disease that the Virginia Department of Health (VDH) addressed when it was formed in 1908.  At that time, VDH had a staff of four and a budget of $40,000. At least half of the budget was used to help the 12,100 Virginians living with TB at that time.  Today, TB remains an important preventable disease in Virginia.  Treating cases of infectious TB disease is important, but it’s only the tip of the iceberg.  We will never end TB without screening people for latent TB infection and treating it to prevent its progression.   Treatment for LTBI can be as short as one dose of medicine a week for 12 weeks!

Should you be screened for latent (or inactive) TB Infection?  You may want to contact your health provider or local health department if you: