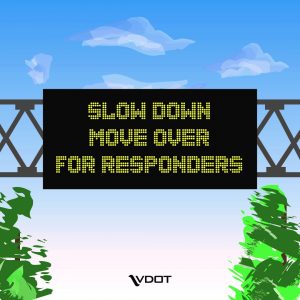 The Virginia General Assembly recognizes June 2019 as Move Over Awareness Month in honor of Lieutenant Bradford Turner Clark. Lt. Clark was struck and killed by a tractor-trailer while he was outside of his fire truck responding to a crash on I-295.

During #MoveOver Month, we’re urging you to move over when you see flashing blue, red or amber lights on Virginia’s highways. Please give first responders and law enforcement officers room to do their jobs; move over and slow down.

Remember, it’s the law. Virginia law states that when approaching a stationary vehicle that is displaying flashing blue, red or amber lights, drivers shall:

Read the Senate Joint Resolution No. 286, which recognizes June 2019 as Move Over Awareness Month in honor of Lieutenant Bradford Turner Clark: http://lis.virginia.gov/cgi-bin/legp604.exe?191+ful+SJ286ER+pdf

Learn more about the Move Over law at: http://www.vsp.virginia.gov/SlowDownMoveOver_VAcode.shtm