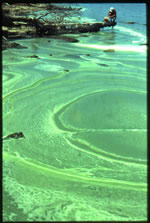 Algae are microscopic organisms that can be found in coastal waters. They are major producers of oxygen and food for many of the animals that live in these waters.

When environmental conditions are favorable for their development, these cells may multiply rapidly and form high numbers of cells; this is called an algal bloom. A bloom often results in a color change in the water. Algal blooms can be any color, but the most common ones are red or brown. These blooms are referred to as red or brown tides. Most algal blooms are not harmful but some do affect fish and humans, as well as other animals like birds and marine mammals. These are known as Harmful Algal Blooms (HABs).

What are the causes of these blooms?
Blooms can be due to a number of reasons. Two common causes are nutrient enrichment and warm waters. Nutrient enrichment of water, especially phosphates and nitrogen, is often the result of pollution from nonpoint sources and can cause algal blooms. Water temperature has also been related to the occurrence of algal blooms, with unusually warm water being conducive to blooms.


How are HABs dangerous to fish and humans?
HABs are dangerous to fish because they can deplete oxygen in water. When oxygen levels become too low, fish suffocate and die. Some algae species in blooms produce toxins that can kill fish and cause illness in humans.

How do you get exposed to HAB toxins?
Most illness associated with HAB exposure is the result of consuming toxins that are present in shellfish or finfish. Recreational contact with water (such as swimming) during a bloom may result in illness as well. Some HAB toxins can become airborne during a bloom and people can become ill by inhaling toxins.

Are HABs in Virginia?
Algal blooms do occur in Virginia but blooms that are composed of harmful species of algae are reported rarely in Virginia. Virginia’s coastal waters are monitored for HABs because it is important to be aware of them when they happen to protect public health.

Is it safe to eat fish from fresh bodies of water that have an algae bloom?
In freshwater areas, fish fillets cleaned from fish caught from bloom waters are considered safe for consumption. The guts and fish carcass should be discarded. Fish fillets should be properly cooked and hands and surfaces should be washed thoroughly with soapy water.

What are the symptoms of exposure to HAB toxins?
Symptoms vary depending upon the toxin involved. Exposure to different toxins results in different illnesses. Exposure effects in humans to several marine toxins has been well studied and documented, however, the health effects of cyanotoxins (the toxins produced by blue-green algae) are not as well understood.

If I were to become sick from exposure to HABs, could I transmit a disease to anyone?
The illnesses caused by toxins from HABs are not spread from one person to another.

What is Virginia doing about HABs?
As collaborators of the Virginia HAB Task Force since 1997, the Department of Environmental Quality, the Department of Health, Old Dominion University, Virginia Institute of Marine Science, and Virginia Marine Resources Council, work together to regularly monitor Virginia waters and shellfish growing areas for the presence of HABs and to conduct surveillance for human health effects. This includes surveillance at public beaches and freshwater inland lakes should blooms encroach swimming areas. The Virginia Department of Health’s Office of Drinking Water coordinates with waterworks operators to support voluntary source water protection plans and provides updates on advisory drinking water thresholds. The public will be notified if a HAB that could affect human health is identified.

How do I report an algae bloom?
If you are concerned that you have been exposed to a harmful algal bloom, please see your doctor or call your local health department. Telling your doctor about contact with water may help him/her treat the illness properly.