Public Advised to Continue to Avoid Contact with Contaminated Water

(Richmond, VA) — The Virginia Department of Health (VDH) is issuing an update for the recreational water advisory issued July 29 for Tuckahoe Creek beginning at River Road, including the Eastern and Western Branches of Tuckahoe Creek, and the James River from Robious Landing Park in Chesterfield, Goochland, and Henrico counties to Belle Isle in the City of Richmond. Sampling results collected by the Virginia Department of Environmental Quality (DEQ) on July 28 indicate the need to maintain the advisory due to high levels of fecal bacteria in Tuckahoe Creek, which may impact portions of the James River of high recreational use.

The sample results at the time of the collection do not indicate that raw sewage concentrations were present in the James River itself, but were concentrated within the creek. This advisory is maintained in an abundance of caution due to the concentration and volume of sewage released into the creek, and its potential to be transported to the James River.

For the safety of people and pets, VDH is advising that recreational water activities, such as swimming, wading, tubing, and whitewater kayaking (where submersion in the water is likely), should continue to be avoided over the weekend. Additional samples are scheduled to be collected on Monday, August 2, weather permitting, by DEQ to re-evaluate the extent of the sewage impact. Laboratory results for samples are expected on August 3, and VDH plans to issue an update to this advisory on August 4.

On the evening of July 27, a Goochland County Public Utilities force main ruptured near River Road, causing the release of an estimated 300,000 gallons of raw, undiluted sewage to a ditch, which outfalls to Tuckahoe Creek. The release was stopped at approximately 11 p.m. on July 27. Repairs of the force main are underway and anticipated to be completed by the evening of July 30.  Additional work to recover ponded sewage at the site is being conducted and will continue on a 24-7 schedule through the weekend.

The advisory will be lifted once bacteria levels in these vicinities are at levels acceptable for recreational contact. 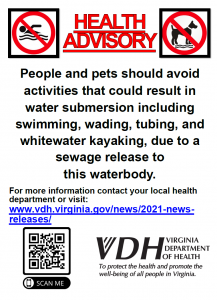 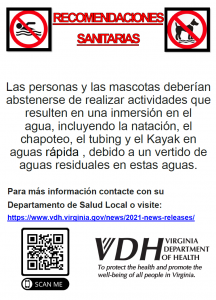