We are all familiar with the death of George Floyd and the resulting protests, riots, and destruction. I separate out these things because they are different and I suspect, organized by different persons or groups. The right of the people to peacefully assemble is fundamental to civil discourse, as many observers have commented, no one was killed or arrested at the demonstrations in Michigan, where the protestors were armed. Although there is not a statute prohibiting the carrying of firearms, there is an implied threat. In many states like Virginia, “brandishing” a firearm is a crime in its own right…. Brandishing a firearm in Virginia (Va. Code §18.2-282) is pointing or holding a firearm in a way that reasonably induces fear in another person. The offense can also be committed by holding a firearm in a public place in a way that reasonably induces fear in another person of being injured or shot.

For full disclosure, I am a sixty-two-year-old white male, but I have worked in the health and medical field my entire adult life. I have focused on policy issues as a public health activity in my duties as an Emergency Coordinator. I often qualify statements with a few caveats in order to acknowledge my privilege when I leap into policy discussion…so, there you have it.

In the media, we have heard from all manner of people; the mothers of black people killed by police, civil rights and social movement leaders, and unfortunately, some people that lump all these issues under a single label.

First and foremost, regarding community policing policies: the militarization of many police departments is in direct conflict with the intent to humanize police officers in our communities. Second, the argument that “a few bad apples….” is unpalatable. Positions of public trust require the screening, ongoing training, and immediate correction wh 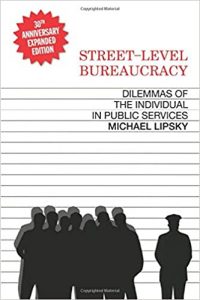 For me, positions of public trust are most bureaucrats (like me), uniformed public servants, and, yes, politicians. This brings me to the thesis of this post: All “Street Level” bureaucrats have discretion, to enforce, to not enforce, to educate rather than enforce. That discretion, in the case of police officers, includes use of force. What is the rationale for subduing a man for selling cigarettes illegally, or an alleged forgery?

In the book, Street-Level Bureaucracy by Lipsky, addresses these issues in detail from not only a policy perspective, but as an individual. I invite all public personnel to read the book and utilize the concepts for internal department policy development.

Excellent examples of public employees who have discretion are those in Child or Adult Protective Services, Environmental Health Specialists, or those police officers.  In my experience, the best public servants understand social determinants that put a person into bad situations but remain non-judgemental about those issues and the enforcement action to be taken within their discretion and the policies of the agency for which they work. This is where the more enlightened communities are Trauma-Informed, describing any number of issues that place an individual into conflict with society.  In my end of the business, we are very familiar with the social determinants of health; from pre-natal care to early childhood development programs, from the school to prison pipeline to the lack of access to healthcare.

Many of life’s traumas and adverse social determinants impact our communities of color. This leads us to the concept of systemic racism; In medicine we see it manifest itself in the treatment of pain, black patients are treated less frequently and with smaller doses for pain management https://journalofethics.ama-assn.org/article/pain-and-ethnicity/2013-05. In the justice system, there are well-documented studies regarding the severity of punishments for black community members versus white community members https://www.prisonpolicy.org/scans/sp/Justice-for-All-Challenging-Racial-Disparities-in-the-Criminal-Justice-System.pdf.

There are a lot of folks, much smarter than I am who have studied these issues in depth. There are over 1.5 million black citizens in Virginia who can articulate historical-cultural disparity, personal experience, and bear witness to the racism in personnel issues, justice system events, and every aspect of society, also, better than I can articulate. That said, I invite you to become an ally to change the systems in which we operate: read widely about these issues and separate out the fact from the fiction. Anecdotes are not data, use the data to establish public policy that serves all of us, not some of us. That also means that we have to collect and act on the data specific to our communities of color.

Sometimes we need a guide to assist in becoming what we know is right, and with that reading widely, please visit Foluke Adebisi’s blog for An Anti-Racism Reading List at https://folukeafrica.com/an-anti-racism-reading-list/.

I will leave the last words for today to Angela Davis: “In a racist society it is not enough to be non-racist. We must be anti-racist.”