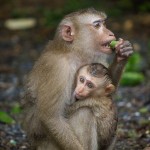 Due to the close genetic relationship between nonhuman primates and humans, disease causing organisms are easily exchanged between them.  The pathogens that can be passed from nonhuman primates to humans and vice versa include bacteria, fungi, parasites, and viruses.  They may be spread by bites, scratches, handling animals or their tissues, airborne transmission of aerosols and droplets, ingestion, and arthropod vectors.  Often the nonhuman primate carries and transmits disease without any visible signs.  Persons in contact with these animals must always be aware of the potential risks involved.  This is especially true when animals are under stress, such as those that have been recently shipped or introduced into a new situation, or have developed a recent illness.  As with many communicable diseases, immunocompromised persons are at greatest risk for infection or serious consequences from such infections.

Nonhuman primates can be divided into several groups; old world monkeys, new world monkeys and others (see Attachment 1 for some scientific and common names).  These groupings have significance when it comes to the kinds of diseases they can contract and transmit.  For instance, one of the most serious diseases that humans can get from monkeys is caused by Herpesvirus simiae virus (B virus, Cercopithecine herpesvirus 1) that is enzootic among old world monkeys of the genus Macaca (macaques).  Fortunately, most pet monkeys in this country are new world species and are bred in this country.  Federal regulations prohibit importation of primates except for scientific, educational, and exhibition purposes.  Importers must be registered with the Centers for Disease Control and Prevention and must hold a special permit to import cynomolgus, rhesus or African green monkeys. Unfortunately, animals may sometimes be smuggled into the country or “adopted” from research facilities.

Rabies
Nonhuman primate rabies is rarely reported in this country and with one exception has always occurred in animals that were recently imported from rabies endemic areas.  The one exception occurred after a dog bit a pet monkey in 1911 during a dog rabies epidemic in Florida. Free ranging, macaque monkeys that have been introduced into Florida’s Ocala Springs area, where raccoon rabies is endemic, have never been diagnosed with rabies.  Between 1957 (the beginning of the raccoon rabies outbreak in Florida) and 1974 more than 640 nonhuman primates were tested for rabies in Florida.

B Virus (Cercopithecine herpesvirus 1)
Up to 90% of adult macaques can be carriers of B-virus; most are asymptomatic, but some can have localized oral lesions.  In humans the infection presents as a rapidly ascending encephalomyelitis with a fatality rate of about 70%.  Most of the 25 well-documented cases of human infection have occurred in laboratory animal handlers who were somehow directly inoculated with tissue or fluid from a monkey via a bite, scratch, needlestick or laboratory injury.  Although experimentally infected new world monkeys develop fatal disease and could conceivably become infected by contact with macaques, under most circumstances bites to humans from new world monkeys should not raise concern about this deadly disease because it is not endemic among new world monkeys.  The attached article,Recommendations for Prevention of and Therapy for Exposure to B Virus (Cercopithecine Herpesvirus 1)(seeAttachment 3) was published November 15, 2002, in Clinical Infectious Diseases, gives details on prevention and treatment following exposure to a macaque.  (http://www.cdc.gov/herpesbvirus/index.html)

Tuberculosis (TB)
Nonhuman primates are very susceptible to infection from mycobacteria tuberculosis (TB) and can contract it from humans or other animals.  Primates from environments where human TB is prevalent are at greatest risk for having the disease.  During the 31 day quarantine of legally imported primates, a minimum of three tuberculin skin tests are performed and positive animals are destroyed.  Illegally imported monkeys and those raised and sold as pets in the US may not be appropriately tested and could be infected.

Local Wound Infections
Approximately 224 strains of bacteria have been identified in human and animal saliva-contaminated wounds.  The organisms most often encountered in the mouths of rhesus monkeys are the Neisseria species, alpha hemolytic streptococci, and Haemophilus parainfluenza.  In addition, the attending physician should be notified of the possibility of infection with Eikenella corrodens, a facultative anaerobe associated with human and nonhuman primate bites, that cause extensive tissue damage.

Simian Immunodeficiency Virus (SIV)
SIV is closely related to HIV-1 and HIV-2 (causes of AIDS) and causes an AIDS-like illness in macaque monkeys; it may be asymptomatic in other species.  There have been no reports of human illness, but there are research workers who developed antibodies to SIV after handling laboratory specimens.

Marburg and Ebola (Filoviruses)
Humans have developed illness from Marburg infection when exposed to tissues from African Green monkeys.  The Ebola viruses from the Sudan and Zaire have not been isolated from monkeys.  A different Ebola virus was discovered in 1995 in West Africa chimpanzees when a researcher became infected.  The Ebola virus that caused an outbreak in a Reston, Virginia monkey quarantine facility, did not cause illness in any humans, but four animal handlers developed antibodies to the virus.  These incidents remind us of the potential for as yet undiscovered human pathogens to be introduced by wild caught monkeys.

Other
Nonhuman primates are more likely to contract hepatitis A, measles, or poliomyelitis from humans or as part of a laboratory experiment than to transmit these diseases to humans.  However, once infected with these diseases, primates pose a risk to the humans with which they are in contact.