What is smoke made of? 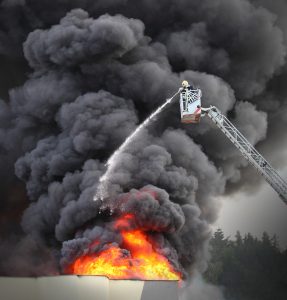 Smoke is a mixture of particles and droplets. The particles are soot, ash, and condensed tar. The droplets are condensed water vapor, and are usually acidic due to acidic nitrogen and sulfur compounds released by the fire. Smoke also contains a wide variety of chemicals depending upon what was burning and how complete the combustion was. Burning plastics can release toxic chemicals, and materials contaminated with heavy metals can release ash containing toxic metals. Incomplete combustion produces carbon monoxide, which is poisonous in high amounts.

How can I be exposed to smoke?

Large fires such as wildfires, building fires, or garbage fires (such as in a landfill) can release large amounts of smoke. Sometimes smoke will linger for several days after the fire is put out or burns out. Breathing smoky air will expose you to smoke.

What are symptoms of smoke exposure? 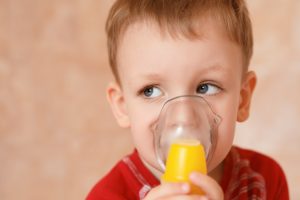 The most common symptoms of smoke exposure are from lung irritation. People exposed to smoke from large fires can get a sore throat, cough, shortness of breath, and wheezing. People who have asthma may have flare-ups. People exposed to smoke may also have burning or itching eyes and symptoms similar to a sinus infection (sinus headache, nasal discharge). The elderly, children, and pregnant women are at greater risk from breathing smoke.

If your breathing is affected by smoke and you have asthma, an obstructive lung disease, or illness such as pneumonia or bronchitis, you should contact your health-care provider. If symptoms are severe or not responding to your rescue medication, get medical help.

Some studies show breathing smoke is associated with a higher risk of heart attack. If you have heart problems you should avoid exposure to smoke. If you have chest pain or rapid heartbeat, get medical help.

Can smoke exposure cause cancer?

Is there a medical test for smoke exposure?

A sputum test can be done to check for markers of lung inflammation. However, this is usually unnecessary since smoke has a strong smell so you will know if you have breathed it.

What can I do to reduce smoke exposure?

When there is a large fire nearby and you can smell smoke outside, stay indoors with the windows shut. If you have a HVAC system, you can run the fan with the fresh air intake closed to circulate the air inside and help filter out smoke particles.

People who have heart problems, asthma, an obstructive lung disease, or an illness such as pneumonia or bronchitis should be especially careful to avoid breathing smoke.

If smoke is very heavy, you may want to leave the area until it clears out. When smoke affects whole neighborhoods, communities may set up clean air shelters where residents can spend time in fresh air.

Dust masks such as you can find in hardware stores will not adequately block smoke and cannot be relied upon to reduce exposure. N-95 or P-100 respirators can block some components of smoke, but they must be fitted correctly. They also do not block the smallest smoke particles and harmful gases found in smoke. People with asthma or an obstructive lung condition may have trouble breathing through a respirator. If you must go outside and choose to use a respirator to reduce your exposure, read the directions for properly fitting your respirator and when to replace it.

Where can I get more information?