November marks American Diabetes Month and, this year, it’s happening along with an early onset of the flu season.

In Virginia, more than 740,000 people are at a higher risk of severe complications from the flu that can lead to hospitalization or sometimes death, says the Centers for Disease Control and Prevention. In recent flu seasons, about 30 percent of adults with flu in hospitals had diabetes.

People who have diabetes have a higher risk of heart disease, stroke or other problems such as kidney failure, blindness, and amputation of a toe, foot, or leg.

Diabetes Month also is an opportunity to learn more about the disease and the challenges of managing diabetes.

Virginia’s plan to help fight diabetes includes federal money to take part in the National Diabetes Prevention Program. It’s a partnership of public and private organizations working to prevent or delay type 2 diabetes. The program helps make it easier for people at risk for type 2 diabetes to participate in programs that help them reduce their risk through healthy habits.

Those diagnosed with diabetes can get help through Diabetes Self Management Education and Support programs. The DSMES services help diabetics learn about taking medicines, planning healthy meals, and being active. Diabetes care and education specialists work with diabetics on a plan that works for them. To learn about the types of diabetes, visit the American Diabetes Association’s website.

One in three Virginians has prediabetes, and most do not know it. To learn whether you are at risk for prediabetes, take the Prediabetes Risk Test. Prediabetes can be reversed before it becomes Type 2 Diabetes. The Diabetes Prevention Program is a year-long program, funded by private and public institutions (and free to you), that focuses on lifestyle change. For help finding a program, visit the Virginia Diabetes Council’s website. 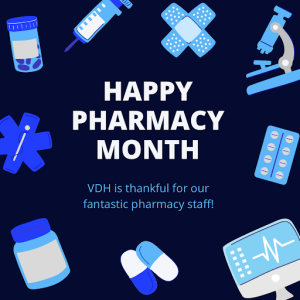 What does the VDH Division of Pharmacy Services (DPS) do?

To support all of these programs, the Pharmacy Shipper ships an average of 150 boxes of medications and supplies per day and receives at least 20 boxes a day!

What other roles do Pharmacists play in VDH?

The pharmacy services team includes pharmacists, pharmacy technicians, pharmacy interns, and other support services. VDH thanks the Division of Pharmacy Services and all of the Pharmacists throughout VDH for their dedication, effort, and work for all people of the Commonwealth of Virginia.

A bird flu virus – a Eurasian strain of H5N1 – that has been spreading across the country has a low risk of infecting people. The virus, also called avian flu, was first found in wild birds, commercial poultry and backyard flocks in January 2022. It has infected several million wild and domestic birds across the country (and the continent) and is still being found. The number of infections is expected to grow during the winter..

Bird owners should review their biosecurity steps and stay aware to protect poultry and pet birds from this disease. Get more information from the USDA’s Defend the Flock Program.

Usually, the virus causes illness and death in birds, but doesn’t cause wildlife to get sick. In this outbreak, large wild birds such as vultures and Canada geese have died off across the country. Some mammals such as foxes and otters have been infected, but that hasn’t been seen often.

People who need to dispose of dead birds should wear appropriate clothing and protective equipment (PPE), including eye protection, a well-fitting mask, gloves, and protective outer clothing (gown or coveralls). The level of PPE needed may depend on the situation. Workers who deal with a large number of sick or dead birds should wear PPE and follow instructions from their agency. A situation with a large number of dead wild birds can be reported to the Department of Wildlife Resources through their wildlife helpline: 1-855-571-9003. This helpline is staffed Monday-Friday during normal business hours.

People who have direct contact with infected animals that are dead or may be sick, including sick animals that might have eaten birds infected with avian flu, should watch for symptoms that include fever or feeling feverish/chills, cough, sore throat, difficulty breathing/shortness of breath, conjunctivitis (eye tearing, redness, irritation, or discharge from eyes), headaches, runny or stuffy nose, muscle or body aches, and diarrhea. You may not have a fever. Anyone who is sick  within 10 days of exposure to an animal that may be infected should call their local health department and get tested if needed.

So far, this virus has been detected in millions of birds. With close monitoring of people who have been in contact with infected birds, only one person has tested positive for this virus. This person had direct exposure to infected poultry, was mildly sick and has recovered. The U.S. Department of Agriculture (USDA) continues to test for and watch this virus and other similar viruses. Right now, officials haven’t found any evidence that this virus could cause a pandemic.

More avian flu information and resources are available at the links below.

We’ve rounded up some tips to help, from choosing costumes and checking candy to hosting a party at home.

When you are making a plan and building your kit, be sure to include your pets and plan for their safety during an emergency.

Make a plan for your pet.

Build a kit for your pet that includes the following:

For additional information on how to care for pets and other animals during and after a storm, visit the following sites:
American Humane
ASPCA
American Red Cross

RICHMOND, VA — The remnants of Tropical Storm Ian are expected to impact areas of the state beginning Friday, September 30 through the weekend. This storm could create dangerous conditions in creeks, rivers, and low lying areas along the coast. The Virginia Department of Health (VDH) reminds people to take precautions to be prepared for severe weather and once the sun comes out, be aware of potential health risks before you participate in recreational water activities.

Heavy rains can increase the risk of animal waste and the potential release of inadequately treated wastewater from sewage treatment plants. Bacteria, debris, and other pollutants in rainwater runoff end up in rivers, lakes and streams, which can pose risks to human health and safety. Rain events also cause flooding and fast-moving waters, especially in low-lying areas.

The most common illnesses from contaminated water are gastrointestinal illnesses. These illnesses may cause vomiting, diarrhea, nausea, abdominal pain or fever and are a result from swallowing water contaminated by disease-causing microbiological organisms. Additionally, contact with contaminated water has the potential to cause upper respiratory (ear, nose, throat) and skin infections.

Residents or facilities that provide water to the public including campgrounds, restaurants, or daycares with private wells or septic systems submerged by flood waters should also take extra precautions.

Rabies is a virus that is commonly found in Virginia’s wildlife, especially in certain wild animals such as raccoons, skunks and foxes.  It’s important to remember though that any mammal can get rabies and so it’s important to take some basic precautions to help protect you and your pets from being infected.  Remember to protect yourself and your pets from rabies exposures by following these simple steps:

Today, the Virginia Department of Health (VDH) announced a further expansion of eligibility for JYNNEOS, the monkeypox vaccine. Newly eligible for vaccination in Virginia are persons of any gender or sexual orientation living with HIV/AIDS or who have been diagnosed with a sexually transmitted infection in the past three months.

“VDH is taking this step to expand eligibility for the JYNNEOS monkeypox vaccine to ensure as many people at high risk of contracting this disease who want to get vaccinated can do so if they choose,” said State Health Commissioner Colin M. Greene, MD, MPH. “Maximizing effectiveness of prevention and treatment against monkeypox now is our best chance to keep it from becoming entrenched in the United States.”

In Virginia, as of Monday, September 26, there were 464 cases of monkeypox, 249 of those Northern Health Region consisting of the Alexandria, Arlington, Fairfax, Loudoun and Prince William Health Districts. Across the state, 21 cases have required hospitalization.

The newly expanded eligibility criteria for vaccination now include additional populations in Virginia. Those who meet one or more of the following are eligible to receive the monkeypox vaccine:

As of September 26, VDH has overseen administration of 9,860 first doses of the two-dose JYNNEOS series and 4,948 second doses.

While anyone, regardless of gender identity or sexual orientation, can catch monkeypox if they have close contact with someone with monkeypox, many of those affected in the current global outbreak are gay, bisexual, or men who have sex with men. While this level of monkeypox activity is unexpected, the risk to the general population is low. People with monkeypox in the current outbreak generally report having close, sustained contact with other people who have monkeypox.

The highest risk activity currently is having sex with multiple or anonymous partners; avoiding these activities greatly reduces one’s risk of catching or spreading monkeypox. Monkeypox does not spread from person to person from walking past someone who is infected or through casual conversation with someone who is infected. Because we are still learning about the vaccine’s effectiveness in the current outbreak, vaccinated individuals should continue to take steps to protect themselves from infection.

Initial symptoms of the disease often include flu-like symptoms, such as fever, headache, muscle aches, and swollen lymph nodes, followed by skin lesions. However, some people have a rash without other symptoms. Although the majority of cases don’t require hospitalization, the rash can be painful. If you have a rash that resembles monkeypox, talk to your healthcare provider about whether you need to get tested. Treatment is available for those at risk of severe illness.

Many people depend on daily medications. Nearly half of Americans take at least one prescription medication; 1 in 4 take three or more. A large-scale natural disaster, such as a hurricane, or other emergency could make it difficult to find an open pharmacy let alone get a prescription filled. You and your family may need to rely on a prepared emergency supply. If, for example, you or a loved one rely on daily medication to treat or manage a chronic disease, it is in your best interest to prepare your medicine cabinet for an emergency. Here’s how:

In the wrong hands, medicines are dangerous. Too often, the wrong hands belong to kids. About 60,000 children are taken to emergency rooms each year because they got into medicines.The threat of medication poisoning in kids and adults is also there in an emergency evacuation when families are forced from their homes and into a shelter, a hotel, or the home of a friend or family. Under stressful circumstances and in unfamiliar surroundings, people can forget to practice safe medication use and storage. Here are three ways you can prepare for and prevent medication poisoning after a disaster.

Source
Prescriptions: Prepare Your Medicine Cabinet for an Emergency
Ready.gov/September

National Preparedness Month is recognized every September to raise awareness about ways to prepare for emergencies and disasters, either natural or man-made. The 2022 theme, A Lasting Legacy, focuses on the importance of protecting every life by preparing for disasters. Ultimately, these efforts will help us create and preserve a long-lasting legacy.

Keeping this theme in mind, the Federal Emergency Management Agency (FEMA) recommends four key steps to prepare for and respond to disasters.

For more information about creating a plan, visit www.ready.gov/plan.

The CDC also recommends planning ahead by staying…

Once you finish planning, it’s time to take action. Make sure to remember your…