The Virginia Department of Health continues to track COVID-19 disparities by race and ethnicity for cases, hospitalizations, deaths, and vaccinations. A previous post, Tracking COVID-19 Disparities, describes them from the start of the pandemic through August 2021. This update examines disparities in April 2022 to describe them at present. By continuing to revisit disparities over time, it is possible to get a sense of where they have improved and where improvement is still needed.

As the original post stated, early on in the pandemic Non-white groups had much higher rates of cases, hospitalizations, and deaths relative to White people. These disparities alleviated to varying degrees across all groups by August 2021. Latino and Asian and Pacific Islanders experienced the greatest reduction in relative rates of cases, hospitalizations, and deaths while having increased vaccination.

To date, there has been significant progress towards vaccinating people in Virginia and the effort continues. 81.7% of the Commonwealth has been vaccinated with at least one dose, 73.1% are fully vaccinated, and 2.9 million people have received a booster shot1.  Additionally, a new variant classified as Omicron has become the dominant variant in the country with cases peaking at a 7-day moving average of 14,328 in early 20223. Vaccination remains the safest way to protect against severe symptoms, hospitalization, and death from COVID-19 and its Omicron variant2.

Rate ratios are used here to quantify disparities by race and ethnicity for cases, hospitalizations, deaths, and vaccinations. A rate ratio compares the rate of events in different groups to a reference group and expresses it as a simple ratio. A previous blog post, Health Disparity Rate Ratios, goes into greater detail about them. In general, higher rate ratios mean higher rates within one group compared to the reference group.

The latest rolling one-year average of rate ratios suggests that the trends in COVID-19 observed during the first half of 2021 have continued in the same direction. Vaccination rate ratios for Latino people climbed to 1.4 times that of White people, while relative hospitalization and death rates both fell to around .8. 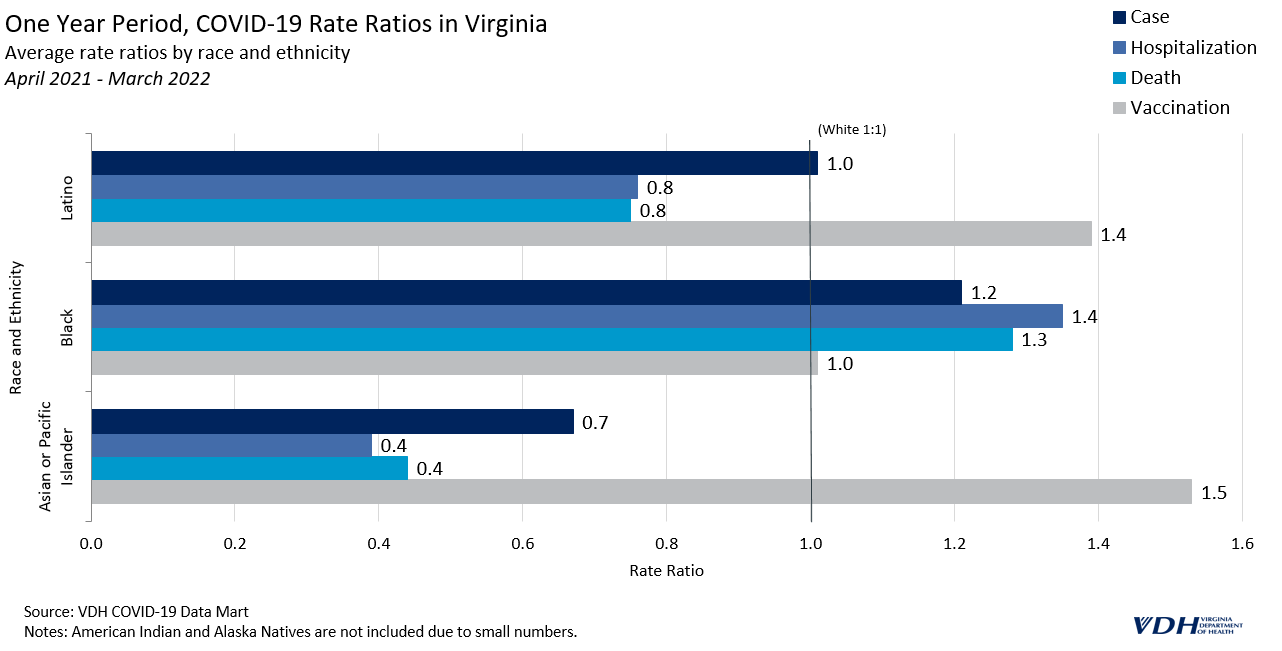 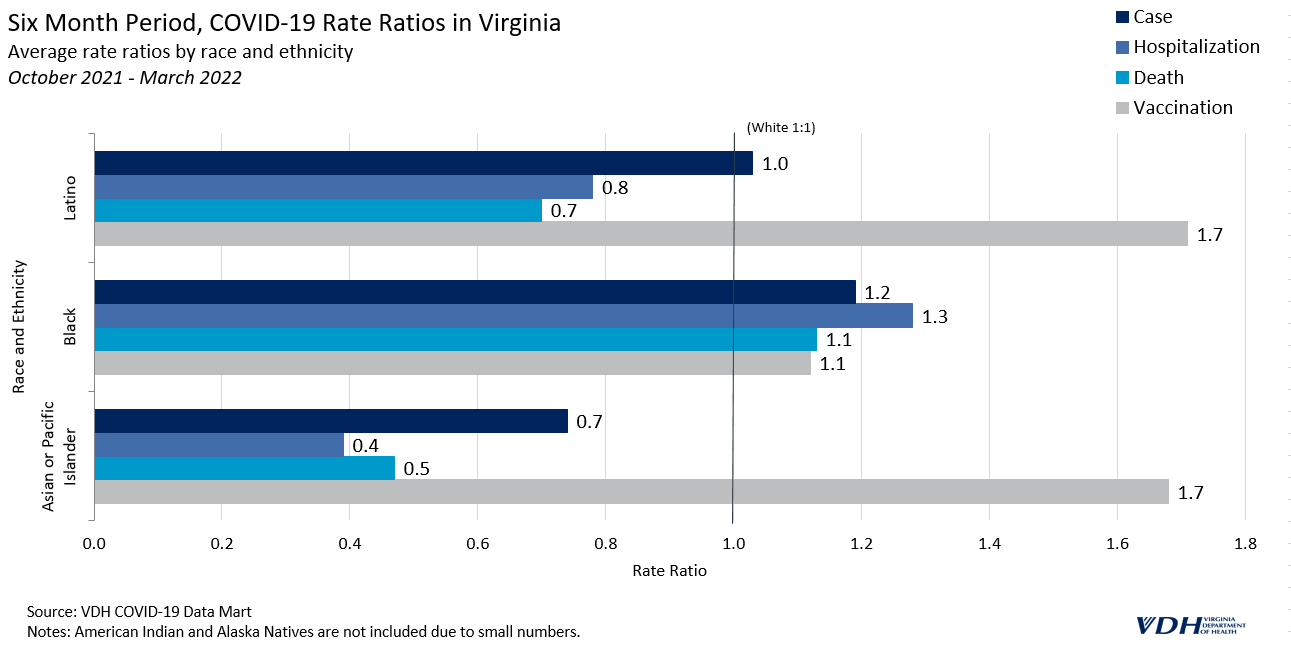 Overall, Virginia has made important progress in vaccinating people, likely contributing to lower case, hospitalization, and death rates observed among some groups. Latino people have experienced the greatest positive shift over the course of the pandemic towards higher vaccination rates and lower COVID-19 rates.

Improvements are still needed to narrow the disparities experienced by Black people, however. Black people continue to have the lowest relative rates of vaccination. While vaccination rates have recently improved among this group, they remain burdened by the highest cases, hospitalizations and death rates.

The Virginia Department of Health continues to prioritize vaccination across all groups with disparities in mind. To view changes in disparities by race and ethnicity updated monthly, please check the Health Equity dashboard page.

How does COVID-19 relate to the flu?

People with COVID-19 and people with influenza (the flu) can have similar signs and symptoms or even none at all. Even though individual infections may look the same, there are some important differences between the two diseases.

It’s important for public health and healthcare providers to be able to tell the difference between the flu and COVID-19.

How does VDH track and measure  COVID-19?

Surveillance is the practice of tracking and measuring the burden and trend of a disease’s impact on a community. VDH conducts surveillance for many diseases and conditions, but the specific methods can vary by disease or condition. For some diseases, including COVID-19, VDH conducts surveillance by counting every case and trying to measure the exact impact of the disease. The benefits of counting individual cases include:

While there are benefits to counting individual cases, there are also challenges:

How does VDH track and measure the flu?

So instead of counting each case of flu, VDH uses other data sources to track each flu season. These variables include:

There are two conditions related to influenza where the benefits of counting individual cases outweigh the challenges. These are:

All three of these instances can result in a new virus that the human population does not have any immunity to, potentially leading to a pandemic. The global community is very concerned about flu pandemics so we closely monitor for these situations, perform contact tracing, and investigate the circumstances. In the United States, there have been two cases of human infection with a novel flu A virus in the past two years. Neither of these occurred in Virginia and neither resulted in additional infections.

Both of these conditions are important, but relatively rare, so the time VDH spends investigating and counting these cases is worthwhile.

For surveillance purposes, each flu season in the United States begins during week 40 and lasts until week 20 of the following year. For the 2021-2022 season this is October 9, 2021 to May 21, 2022.  As of January 1, 2022, Virginia is at the ‘Widespread’ geographic activity level. This means that there was elevated influenza activity in at least three out of five health regions in Virginia. All five regions are above ILI threshold, and six outbreaks have been identified to date. For the most up-to-date information, see the Weekly Influenza Activity Report.

There are a few factors that could contribute to seeing such low levels of flu activity:

Of these three possibilities, the third is the most likely to have a large impact, followed by the first. We know that the Southern Hemisphere did not test as many people for flu as they would have during a typical flu season. We also know that among those who were tested, a much smaller percentage were positive than we would have normally expected.

VDH will continue to track flu and publish the Weekly Influenza Activity Report throughout the 2021-2022 flu season.

As we face rising case counts of COVID-19 coming out of the holiday season, it’s very important to make sure there are hospital beds available for those who need them. This means taking all the recommended steps to protect ourselves and our families against COVID-19 and the flu:

The Virginia Department of Health (VDH) counts the number of deaths associated with COVID-19 to understand the impact of the COVID-19 pandemic. VDH is using national guidance (released December 2021) to assess COVID-19 deaths. These assessments are made either through the course of local public health department investigation of a COVID-19 case or through death certificate review. VDH counts a COVID-19-associated death if it meets any of the criteria below:

Some helpful things to remember about COVID-19-associated deaths:

The Virginia Department of Health tracks COVID-19 disparities by race and ethnicity for cases, hospitalizations, deaths, and vaccinations. This is important because underlying health and social inequities put some racial and ethnic groups at greater risk than others. By examining disparities over the course of the pandemic, it is possible to get a sense of where they have improved and where improvement is still needed.

Early in the pandemic it became clear disparities were severe across the United States, so the Virginia Department of Health began tracking cases, deaths, and hospitalizations by race, ethnicity, age, and socioeconomic status, to learn how different groups were impacted. Mortality was disproportionately higher for racial and ethnic minority persons than for White persons.1  This analysis compares three different periods of the pandemic in Virginia to better understand disparities within the Commonwealth and how they have changed so far.

Rate ratios are used to quantify disparity. A rate ratio compares the rate of events in different groups to a reference group and expresses it as a simple ratio. A previous blog post, Health Disparity Rate Ratios, goes into greater detail about them. In general, higher rate ratios mean higher rates within one group compared to the reference group.

During the spring and summer of 2020, cases surged across the United States and disparities were more pronounced than at any other point in the pandemic. The 7-day moving average of cases in Virginia hovered around 1,000 during this time. Latino people were most impacted initially; they were more likely to get COVID-19, and subsequently die from it, compared to any other group in Virginia, with case rates consistently at least five times the rate of White people. Black people also had case and death rates that were twice as high as White people.

Some of the early disparities in cases likely stemmed from outbreaks among front-line and essential workers, particularly those in the meat and poultry industry. Lessons learned from these early outbreaks helped to inform future responses and outreach. For example, one investigation into outbreaks in Chesterfield County and Richmond City identified lack of accessible health information in Spanish, lack of insurance and paid sick leave, and employment in frontline industries as risk factors for COVID-19 in Latino communities. Public health officials and policy-makers responded with strategies to address these disparities. 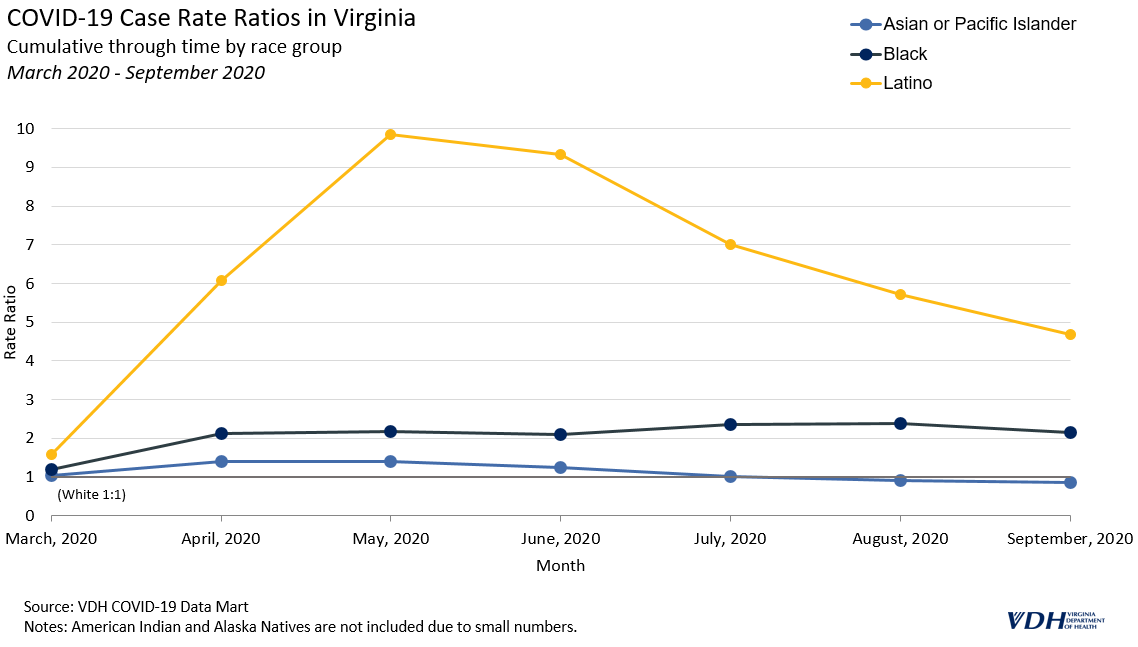 In the fall of 2020 and winter of 2020-2021, the number of cases in Virginia reached new highs while racial and ethnic disparities began to decline. The 7-day moving average of cases rose from around 1,000 in October to over 5,000, and remained above 3,000 through February. This was the highest peak in cases during the pandemic so far.

During the peak, Latino people still had a case rate of about four times that of White people, but by January 2021, that number dropped to 2.2.

A similar trend can be seen for Black people, decreasing from 1.9 times that of White people to around 1.4 times. Asian or Pacific Islander people remained near or below the cumulative case rate of White people throughout the pandemic.

Disparity in COVID-19 case and death rates changed significantly after March 2021, when 21% of people in Virginia had received at least one dose of vaccine and cases briefly dipped to lower  levels. In June, the 7-day moving average was as low as 145, though it quickly returned to over 3,000. Now, with varying levels of vaccine uptake among racial and ethnic groups, COVID-19 disparities have shifted.

The current COVID-19 vaccines have been proven to be effective at preventing infection, severe illness, and death from COVID-19; they are the most important preventive measure to reduce the impact of the virus on individuals and communities. The extent to which racial and ethnic minorities are vaccinated has likely affected case and death rate disparities in Virginia. 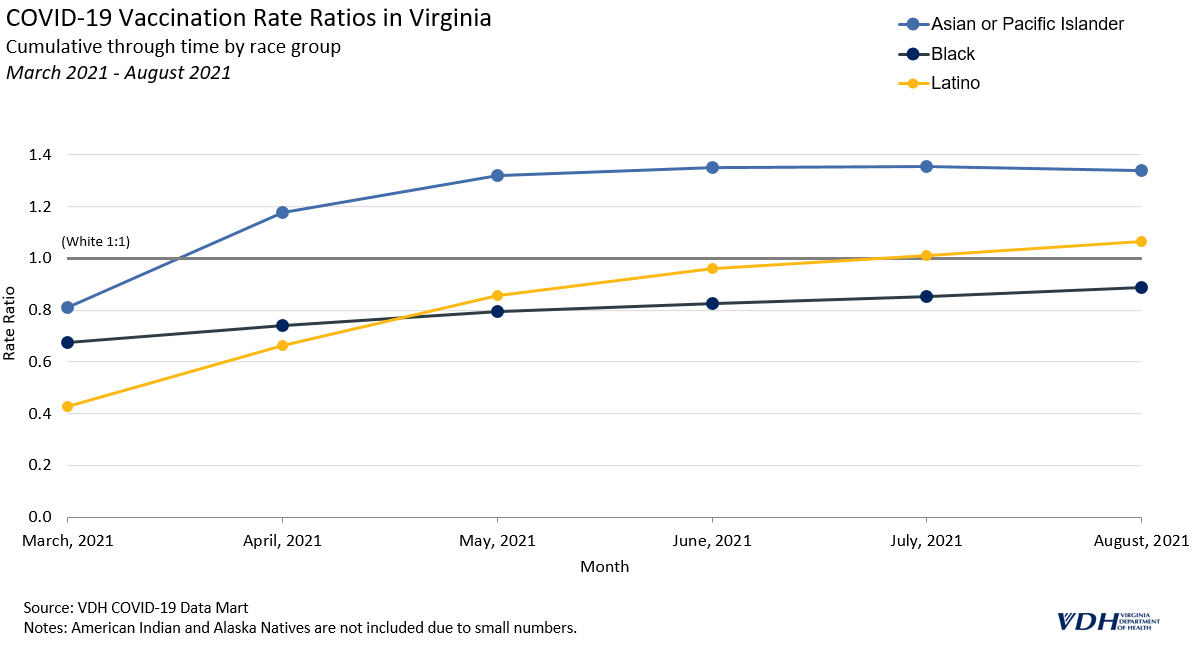 Asian and Pacific Islander people have a higher overall vaccination rate, around 1.3 times that of White people. Additionally, Latino people are now the second most vaccinated group, while White and Black people are less likely to be vaccinated. 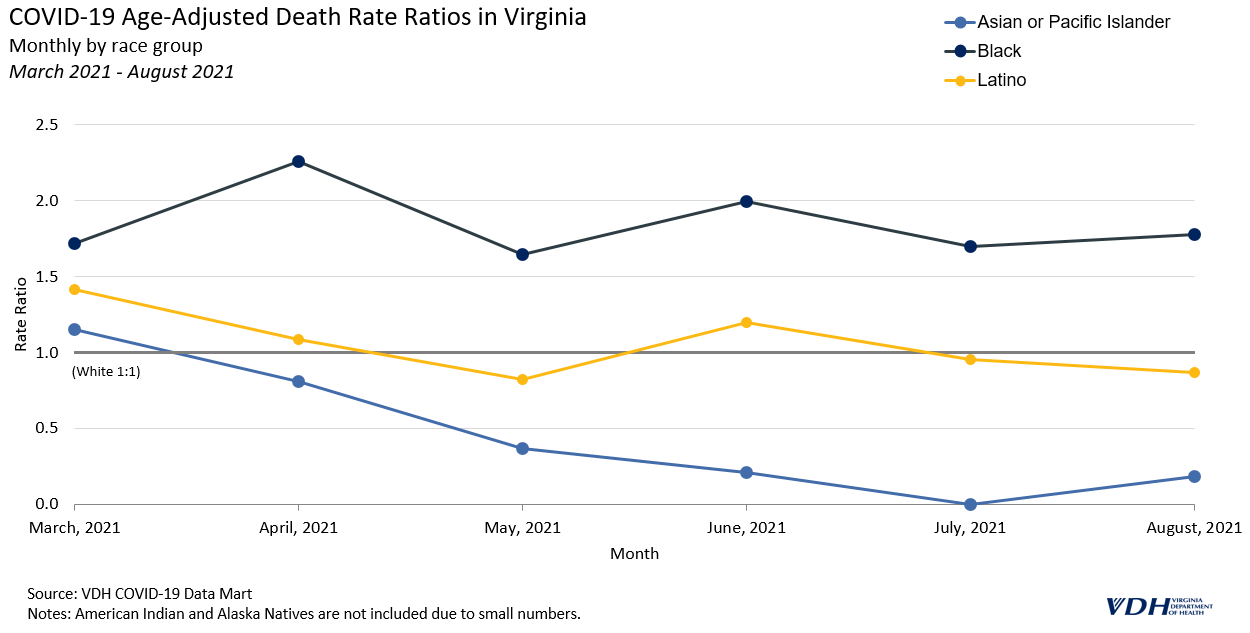 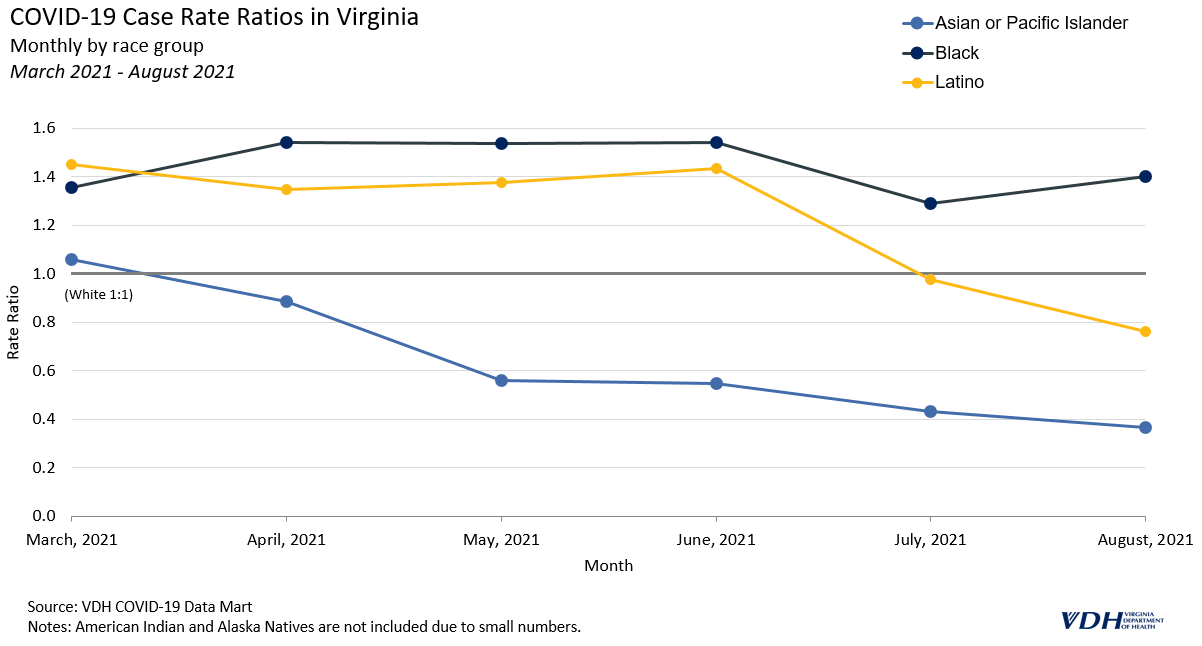 Vaccine hesitancy is a significant barrier to decreasing death rates for all groups in Virginia, and is a particular issue among Black communities. Further research is needed to fully understand the impact, but the extent to which different racial and ethnic groups in Virginia are getting vaccinated is likely affecting death rates from COVID-19. Trends in COVID-19 case and death rate disparities are likely to change as more people get vaccinated. The Virginia Department of Health updates rate ratios monthly on its COVID-19 Cases & Testing Dashboards to maintain its commitment to transparently tracking COVID-19 disparities in the Commonwealth.

* The impact of the Delta variant cannot be fully presented due to the lack of data points since July when it became the major variant.

*American Indian and Alaska Natives were not included in this analysis due to the small size of that population.

COVID-19 testing data are complex. There are several ways of looking at these numbers, and VDH has used several of these methods over the course of our COVID-19 response.

Besides these two methods of measuring the number of tests Virginia has conducted, there are a few other things to keep in mind.