About Transgender Health Services at the Virginia Department of Health

The Virginia Department of Health continues to support these activities:

The Virginia Transgender Resource & Referral List (“the List”) is intended as an informational resource only.  Providers included here have not been endorsed, certified, or vetted by the Virginia Department of Health beyond fulfilling the requirement to complete and send in the Transgender Resource and Referral List Information Form.  VDH can make no guarantees about providers listed here.  VDH contacts all entities included on the List annually to check that each organization’s information is accurate and up to date, but cannot guarantee accuracy throughout the year.

Further, websites and other materials developed or produced by these providers are solely the responsibility of those entities.  VDH cannot censor external sites’ content, so it is possible that some individuals who choose to browse an outside website may encounter materials or information that they consider offensive or inappropriate.  If you have questions or comments about content on a provider’s website, please contact the provider directly to address your concerns.

If you are a service provider who is interested in being added to the Virginia Transgender Resource & Referral List, you can fill out this form and send it in via the fax number or email address found on the form.

Started in 2003, THIS was the first major project of the Virginia Transgender Task Force.  The research was conducted in two phases. Phase I was a series of focus groups conducted in various locations around the state.  The findings of this effort are described in the Transgender Health Access in Virginia: Focus Group Report.

The results of the Focus Group Report guided Phase II of THIS, the development of a statewide survey on the health care and health needs of transgender persons in Virginia. The survey particularly focused on HIV status and access to care and prevention services, but also included areas of associated risk, including housing and employment status, experiences of violence, sexual abuse, and discrimination in housing and employment. Also covered were participants’ experiences with general health care providers and access to health care services and health insurance. The results of the survey are described in the statewide survey report titled, The Health, Health-Related Needs, and Lifecourse Experiences of Transgender Virginians, published in early 2007.

In 2017, DDP began the process of developing a new statewide study! Initial roll-out began in fall of 2018 in the Richmond and Charlottesville areas, and other areas are gradually being added. The current study will update and expand upon the knowledge gained from the previous survey. As this effort moves forward, updates will be posted in the Community Announcements section above. Please check back to learn more. 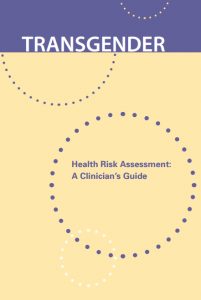 The Guide has been available since August of 2006, mainly through distribution at relevant events, service providers’ offices, and by ordering through the VDH Disease Prevention Hotline.  It contains the following sections: Why Focus on Transgender Health?, Psychosocial Issues, General Questions to Assess Health Issues, Assessing Sexual Risks and Other HIV Risks, a brief glossary of terms, and Resources. A PDF of the brochure can be viewed or downloaded by clicking on the image to the left.

Any reports or publications mentioned on this page, in addition to a series of Transgender Health Newsletters, can be found on an archive page.  They are housed with other items that were created or published more than five years ago.