Today there are more tools than ever to prevent HIV.  Strategies include using condoms, not sharing injection equipment, and taking a daily pill to prevent HIV (PrEP).  Getting tested and treated for STDs can lower your chances of getting HIV.  Not having sex and not injecting drugs ensure that you won’t get HIV.

Treatment is Prevention!  People living with HIV who stay on their medication and have so little virus in their body that a blood test cannot measure it, can’t give HIV to a partner.  This is called viral suppression.   Sometimes you will see this called U=U, or Undetectable = Untransmittable. 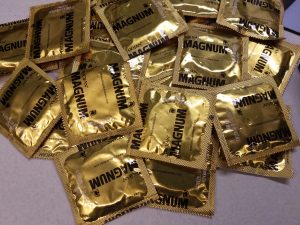 If used correctly condoms are highly effective in preventing HIV and some STDs.  Condoms do not provide good protection against STDs that are transmitted through skin-to-skin contact.  Gonorrhea and chlamydia are two examples.

There are two types of condoms: male and internal (also known as female).  It is important that you know how to use both correctly for your protection.

For both male and internal condoms, only one condom should be used at a time.  Using multiple condoms at one time increases friction and the likelihood that both condoms would tear.

A new condom should be used each time a sexual encounter occurs.  After a condom is used it should be properly disposed of.

Even if condoms are used the right way every time you have sex, there is still a chance of getting HIV or STDs.  For some individuals at high risk of getting or transmitting HIV or STDs, adding other prevention methods may be ideal.

A male condom is a thin layer of protection that is worn over the penis during sex.  It is available in different materials.

Internal (or female condoms) are thin pouches made of a thin latex product called nitrile.  It can be inserted into the vagina or anus for intercourse.

Lubrication, or lube, assists with HIV and STD prevention.  It can help prevent condoms from breaking and slipping.  Water-based and silicone-based lube is safe to use with all condoms.

There are currently several strategies to prevent HIV with medication.  If you are at risk for contracting HIV, you may take a pill daily prior to any risk behaviors.  This is called HIV pre-exposure prophylaxis (PrEP).  If you have already potentially been exposed to HIV, you may also take medication to prevent infection.  This is called post-exposure prophylaxis (PEP).  If the exposure is non-occupational it is called nPEP.  PEP and nPEP must be administered within 72 hours of a potential exposure.  For more information on PrEP or nPEP, visit our PrEP and nPEP page.

Additionally, it has been proven that persons living with HIV that are on their HIV medication, and have a low number of copies of virus in their system will not transmit the virus to their HIV-negative partners.  This is called treatment as prevention, or TasP.  For more information on TasP, visit CDC.gov.

People who share needles, syringes or other equipment to inject drugs, silicone or hormones are at high risk for getting HIV, hepatitis B and hepatitis C.  Reusing needles can also lead to infections such as skin abscesses and endocarditis (a heart infection). Comprehensive Harm Reduction programs (also called needle exchange or syringe services) help people reduce the negative health impacts of drug use. These programs provide new syringes and needles, disposal of used syringes, referral to drug treatment and medical care, Naloxone (to reverse overdoses), education and counseling, testing for HIV, hepatitis and other diseases, and referral to social services and insurance.  Location of Comprehensive Harm Reduction programs in Virginia can be found at: https://www.vdh.virginia.gov/disease-prevention/chr/.

If you are pregnant it is very important to talk to your healthcare provider.

If you are unaware of your HIV status it is important to get tested and follow the recommendations of your provider.  These recommendations could include preventative methods such as PrEP if your partner is HIV-positive.

Mothers that are HIV-positive should follow recommendations from their provider and make sure that they take their medications as prescribed.  If you are treated for HIV early in your pregnancy the risk of transmitting HIV to your baby can be 1% or less.  Breast milk contains HIV.  Even with an undetectable viral load breastfeeding should be avoided.