Dosimetry devices are used to measure an individual’s exposure to radiation.  Sometimes this is referred to as external dose.  There are regulatory dose limits for the general public, and occupational workers.  Federal guidance for emergency workers is included in state and local Radiological Emergency Plans.

Ideally, dosimetry should measure one’s radiation dose; however, the instrument measures all the radiation that it is exposed to.  Some radiation passes through the person and is not absorbed by the body and does not contribute to the person’s radiation dose.  Unless one’s exposure limit is exceeded, it is common practice to assume the dose is equal to the exposure recorded by the dosimeter.

There are several kinds of dosimeters: Self-Reading Dosimeters (SRD), Personal Radiation Devices (PRD), Thermoluminescent badge dosimeters (TLD) and Optically Stimulated Luminescence badge dosimeters (OSD).  The SRD allows an individual to observe his exposure at any time.  The device is a small tube, slightly larger in diameter than an ink pen.  It is an ion chamber that has a charge on its plates similar to a capacitor.  When it is exposed to radiation, the plates discharge in proportion to the amount of radiation.  Sometimes static electricity or dropping the SRD will discharge the plates causing the needle to go off scale and the user might be concerned that he has been in an extremely high radiation field.   An emergency worker should always have a survey meter on if he thinks he is going to be exposed to radiation, and have a two man field team, so that one can check the other’s dosimeter if the SRD does accidentally discharge.  SRDs should be tested annually for electrical leakage.  There are now electronic versions available (e.g., PRDs) and they should also be calibrated annually. 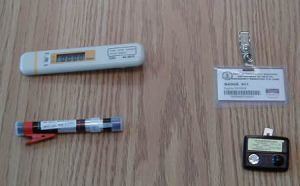 Figure 1.  Left side – Self Reading Dosimeters.  An example of an electronic version is on top, and the original ion chamber reader is on the bottom.  Right side – badges.  Top is a TLD badge for emergency workers, and the bottom is a film badge typically found in medical departments.  The TLD/film badge can only be read by sending it to a laboratory; however, it does provide a permanent record of one’s exposure.  There are badge services for emergency workers.  Badge services should participate in the National Institute of Standards and Technology’s  National Voluntary Accreditation Program (NAVLAP).

An electronic dosimeter has alarm set points.  If it has a dose rate function, we recommend that one of the set points be set for a dose rate of 2 millirem per hour, which is a regulatory protection standard.

For the accumulated dose function, we recommend that one of the alarm points be set at 10 percent of the occupational limit (5 rem) to 500 millirem.  This value is also the limit for a member of the general public.  Consult the State Emergency Operations Plan or your local radiation emergency plan for emergency worker limits.

Do not use any of these devices as either a radiation detector or survey instrument.

Local jurisdictions located within the 10 mile EPZ of a nuclear power station are tasked with providing SRDs and TLD badges, or equivalent dosimetry, to their designated emergency workers.