The risk jurisdictions located in a nuclear power station’s  10 mile Emergency Planning Zone (EPZ) are provided Ludlum Model 2240 I survey meters.  This instrument has either a pancake probe or a stick probe depending on how the instrument is used. 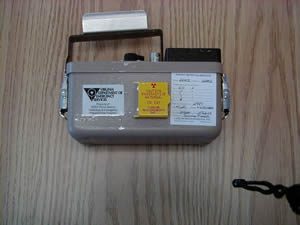 Figure 1. The instrument has a digital readout to simplify recording readings.  When the probe’s limits are exceeded, there is a switch to use the internal probe that can operate in a radiation field up to 100 R/hr.  The instrument has a radioactive source under the yellow cover plate attached to the side so the operator may check its operational readiness. The instrument should be calibrated annually (see calibration sticker on right side of instrument). 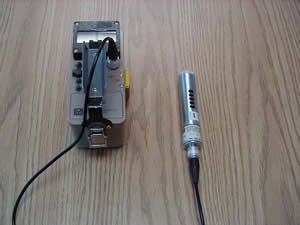 Figure 2. The stick probe on the right, is an energy compensated probe, has a sliding window to differentiate between a gamma field and a mixed beta/gamma field.  The closed window blocks the beta particles and measures only the gamma radiation.  When the window is open as shown in the picture above, the probe detects both the beta and the gamma radiations.

The stick probe is useful to measure exposure rates in mixed radiation fields in an airborne plume or deposition on the ground.  Units of measure are typically milliRoentgen per hour (mR/hr) and Roentgen per hour (R/Hr). 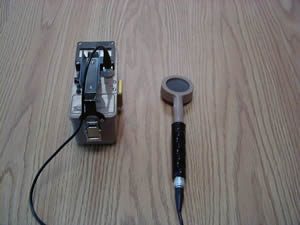 Figure 3. The pancake probe on the right is useful to make comparisons of potentially radiological contaminated vehicles and persons with natural background. The unit of measure is in terms of counts per minute (CPM).   Other Virginia localities that do not participate in the nuclear power plant preparedness activities might consider the Ludlum Model 2241 or equivalent.  The instrument should have an internal probe to detect high radiation fields and a check source mounted on the instrument so the operator may perform an operational check to ensure that instrument is working properly.  This instrument will allow the operator to chose any one of three probes: stick probe, pancake probe, or the gamma scintillator (See Figure 4).  The sodium iodide detector is very sensitive to radiation and is very useful to detect lost sources.  The readings are usually in units of CPM.  When using the sodium iodide probe, one should be prepared to see high readings (several thousand CPM) compared to either the stick or pancake probes.  It is very important to turn on the instrument before one enters a radiation field to determine the background or normal readings.

VDH uses a Ludlum Model 19.  This instrument contains an internal sodium iodide detector and is used to measure background and small changes in background.  Typical applications are finding lost sources in scrap metal facilities and landfills.  Units of measure are microRoentgen per Hour (uR/hr).  This is one thousandths of a milliRoentgen.  Typical background values in Virginia are 5- 20 uR/hr.

VDH recommends scrap metal facilities and operators have such an instrument, particularly if they have a radiation monitor for shipments entering their facility.  This instrument will assist them in identifying which part of the shipment may possibly have a radioactive materials device or if the entire shipment is contaminated, and also what the radiation levels are.  This information is important so that VDH may promptly issue a US DOT exemption so the facility may return the shipment to its point of origin.

VDEM provides certain localities with portal monitors to survey large numbers of people expected at designated evacuation assembly centers.  These facilities are associated with emergency preparedness for nuclear power plant accidents.  The portal monitors can survey a person in 5 seconds, while an emergency worker with a survey meter and  pancake probe will take about 3 minutes. Operational checks of the portal monitor should be made annually with a check source.

Figure 5. Portal Monitor set up by the Department of Energy during VOPEX 2003.  There are several detectors in the frame of the monitor. The electronics will cause an alarm to sound and indicate which detector detected the radiation if a person were contaminated.  An emergency work would then use a hand held survey instrument to locate area contaminated and evaluate whether attempts to remove contamination was successful.

Local jurisdictions interested in purchasing a portal monitor for homeland security purposes should go to the Department of Homeland Security’sweb site and refer to ANSI N42.35:  Evaluation and Performance of Radiation Detection Portal Monitors for Use in Homeland Security. 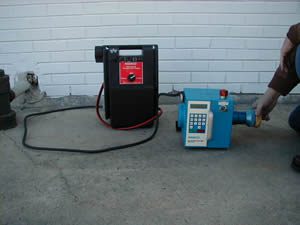 Air pumps are used to measure airborne particulate radiation on a paper filter, and radio-iodine with a charcoal or silver zeolite canister.  These air pumps are probably only useful for a nuclear power plant accident if there is a release to the atmosphere.

Figure 6. On the left is a battery pack to power the air pump on the right.  The air pump has an inlet that has a paper filter and a charcoal/silver zeolite canister filter. After a known volume of air as passed through the filters, the filters are removed and sent to a laboratory for analysis.

It is doubtful whether air sampling would be useful in performing accident assessments in other accident scenarios including terrorist events.  First responders typically respond to fires or other extremely dusty/smoky accident scenes with respiratory protection, such as Self-Contained Breathing Apparatus (SCBA) and protective clothing- turn out gear.  The general public is usually evacuated to an area free of smoke or other airborne material. 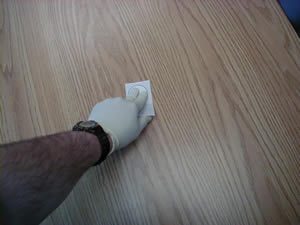 The paper swipe or smear is about two inches in diameter and is gently rubbed across the surface of an object whenever there is suspected contamination, such as damaged packages containing radioactive materials or a potentially breached seal source. A swipe of the surface is taken and measured on a survey instrument such as a pancake probe.  The swipe can also be placed in an individual envelope to prevent cross contamination with other swipes and sent to a laboratory for further analysis.  Swipes are useful to detect removable contamination that consists of alpha and beta emitters.

Figure 7. A gloved hand should be used to wipe a surface representing about 100 cm2 to determine the presence of removable contamination.

There are portable instruments available that can identify certain gamma emitters by analyzing the energy peaks emitted. Specific radionuclides emit gamma radiation at certain energy levels for a given radioisotope.  Such instruments should be used with caution.  Interpretation of the spectrum requires a trained operator, since mixed gamma emitters will present a complicated spectrum.  The purchase of this type of equipment should also include a set of check sources of several gamma emitters to provide the operator some confidence in the operation of the equipment.   VDH currently is using the portable Exploranium GR-135; however, there are several vendors who make equivalent instrumentation.

Local jurisdictions interested in purchasing this type of equipment for homeland security purposes should go to the Department of Homeland Security’s web site and refer to ANSI N42.34:  Performance Criteria for Hand-Held Instruments for the Detection and Identification of Radionuclides. This standard addresses instruments that can be used for homeland security applications to detect and identify radionuclides, for gamma dose rate measurement, and for indication of neutron radiation. This standard specifies general requirements and test procedures, radiation response requirements, and electrical, mechanical, and environmental requirements.  Successful completion of the tests described in this standard should not be construed as an ability to successfully identify all isotopes in all environments.